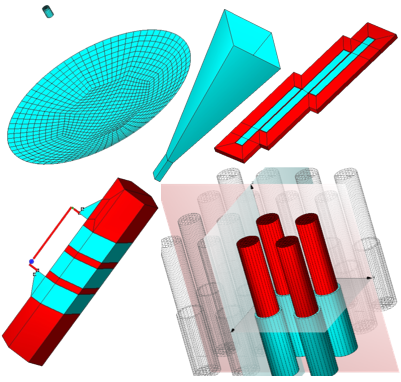 In this application note, several benchmark models are created and simulated in order to demonstrate WIPL-D Pro capabilities. WIPL-D Pro is full wave 3D EM solver, based on Method-of-Moments (MoM) and empowered with quadrilateral mesh and higher-order basis functions (HOBFs). All the models should be considered as demonstrational models. It is expected that the output results and relatively short simulation times will be in the focus of the reader of this document. The examples include reflector antenna with parabolic dish, microstrip patch antenna, printed microstrip band pass filter, horn antenna, coil with ferrite core, dielectric rod antenna and dielectric rod antenna arrays.

All simulations were carried out at regular desktop PC almost instantaneously.

This application note represents an addition to the document Benchmark Examples (1). However, it can be read without previous reading of the previous material. Various benchmark examples are created and simulated in order to present WIPL-D Pro capabilities. It is expected that the output results and relatively short simulation times will be in the focus of the reader of this document.

All examples are simulated on regular desktop PC in very short simulation time. 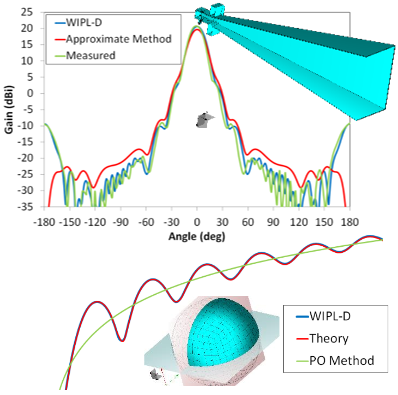 This paper presents several benchmarks which were requested by Technical Committee on Electronics Simulation Technology (EST) of the Institute of Electronics, Information and Communication Engineers (IECE) in Japan. WIPL-D simulation results are compared with known solution so that we establish the accuracy of simulation. WIPL-D solution is compared either with analytical results, measured data or results from EM software modules which were also provided by EST tailored especially for the specific problem.

All models are simulated on a regular desktop PC with minimum requirements. 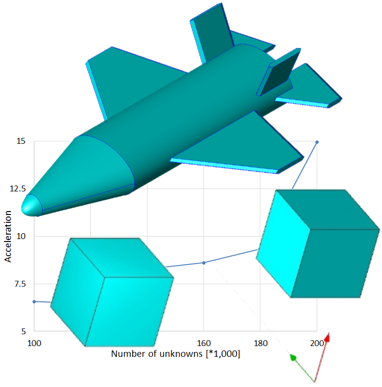 For electrically small problems, where the MoM matrix has up to a few thousands of unknown coefficients (unknowns), the fill-in time is dominant. For electrically large problems, above 50,000 of unknowns, the matrix inversion time requires 80-90% of the total simulation time. The most important aspect of the matrix fill-in is to efficiently exploit the advantage of modern CPU hardware, which all have multi-core capabilities. In addition, WIPL-D GPU Solver is an add-on tool that efficiently exploits high computation power of nVIDIA CUDA™-enabled GPUs to significantly decrease EM simulation time. The acceleration is up to an order of magnitude for the matrix inversion phase.

As an example, the total simulation time is decreased (by using multi-core CPU fill-in and multi-GPU matrix inversion) to less than one hour for a problem with 200,000 unknowns. 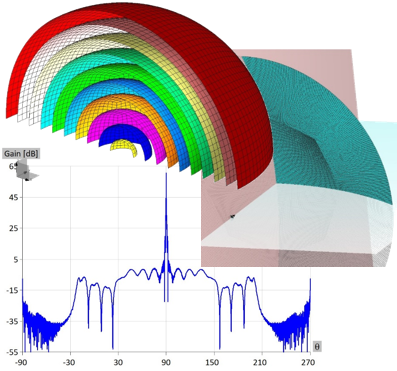 The GPU Solver enables WIPL-D Pro to significantly decrease the simulation time, particularly for the dominant component – MoM Matrix inversion. This applies especially in the case of very complex and electrically large structures with dramatically large number of unknowns. In such cases, the suggested simulation approach is using GPUs to perform computing operations instead of CPU.

Significant acceleration is demonstrated even for the problems with 50,000 – 150,000 unknowns compared to a CPU workstation with 2 CPUs, each with 12 cores. Such problems are within reach of the CPU solution, especially if there is enough available RAM.

The app note shows the simulation times for an affordable workstation with 4 low-cost GPU cards and several hard discs supporting the GPU solver. All times are rather short and acceptable from the engineering point of view.

If the system matrix is symmetrical, as in the cases of pure metallic structures, the reduced matrix inversion can be applied with significantly shortened simulation time. The two demo problems are Luneburg lens and the Cassegrein reflector antenna. 440 lambda Cassegrein, normally out of reach for any full wave solver, is solved in only 6 hours for the 500,000 MoM unknowns problem. 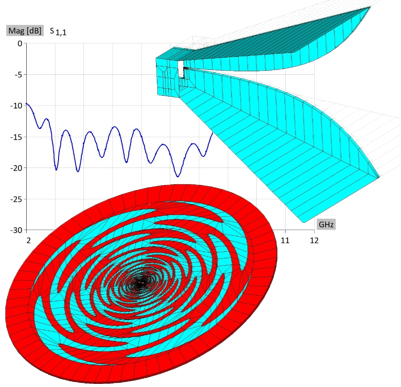 The focus of the application note is set of examples where the advantages of MoM are theoretically minimal: ultra wide band, large number of frequency points and electrically small or moderate size structures (the number of unknowns is low, while size of elements prevents usage of HOBFs and the number of mesh elements is relatively high).

The simulation times are compared for a modern quad core CPU versus a modest multi-core configuration with two affordable 12-cores CPUs Highly efficient parallelization of the matrix fill-in phase is done at both platforms.

Using the modern configurations with 20+ cores improves the simulation times for UWB applications or electrically small antennas with many details dramatically. This extends the range of EM problems that can be solved by only using CPU with acceptable simulation times for EM and RF engineers. 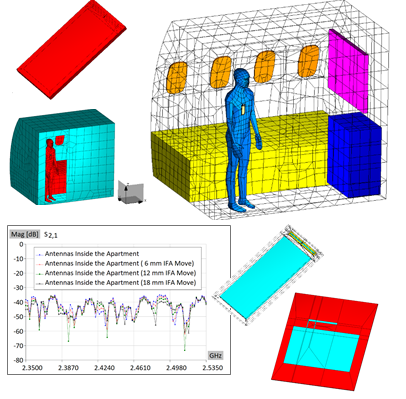 IoT Scenario Within an Aircraft Apartment

The operating environment an Internet of Things (IoT) system is usually complex and includes the presence of some obstacles e. g. furniture for an indoor scenario. A typical example of such a scenario could be a modern traveling environment onboard a luxury aircraft which includes a passenger inside an aircraft apartment and several pieces of furniture. On the one side of an IoT link is a traveler with a cellphone, and on the other side is a warning sensor located in a locker compartment intended to warn the passenger if an object is forgotten inside a locker. The cellphone antenna is modeled as a printed dipole inside the phone housing, while the sensor hardware is simplified to an inverted-F antenna (IFA). The operating frequency of this IoT warning system is assumed to be approximately 2.40 GHz.

All simulations will be carried out using WIPL-D Software, a cutting-edge full wave 3D electromagnetic Method-of-Moments based software. It will be shown that calculations are very efficient providing high accuracy in reasonable simulation time. 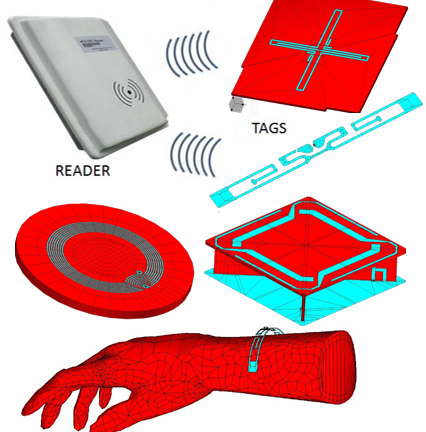 Radio-frequency identification (RFID) is one of the many electromagnetic (EM) applications where WIPL-D software suite is successfully used. RFID assumes the wireless use of electromagnetic fields to transfer data, mostly for the purposes of automatic identification and tracking of various tags attached to target objects.

WIPL-D Pro as a method of Moments based code is very suitable for RFID. Most of the small and less complex tags are simulated in a few seconds. WIPL-D is extremely efficient for open radiating problems and especially for simulation of coupling between very distant objects (no boundary box requirement). WIPL-D Pro does not require to mesh the space between reader and the tag. 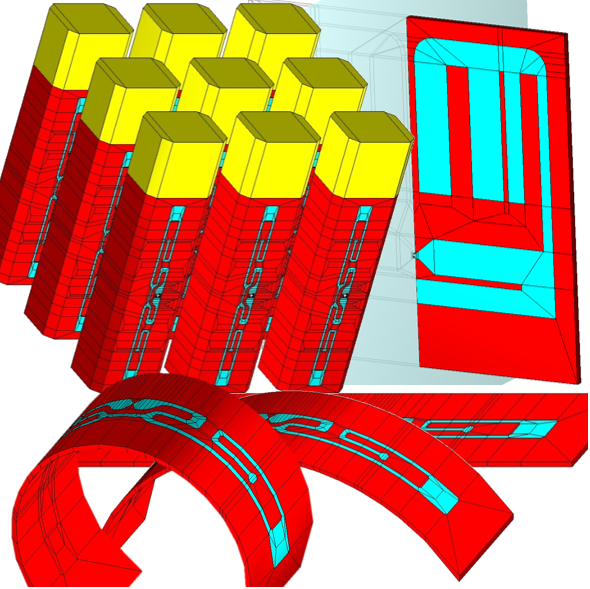 In the application note “RFID Applications” we have shown several RFID designs. Here we extend the work by showing some typical reader/tag design, observations on flexible substrates and miniaturization, as well as realistic RFIF scenario.

The most complex simulation shows RFID tags mounted to plastic containers, RFID reader spaced 2m apart. the results of interest are coupling between antennas and time domain responses of these narrow-band antennas. the simulation requirements do not depend on distance between antennas since there is no bounding box. The space between antennas is not meshed and does not contribute to solution complexity.

This application note focuses on the simulation of a classical FSS structure by applying the feature “apertures in PEC/PMC plane”. The FFS comprises of large periodical array of mushroom type printed patches, spaced by a narrow gap. In order to emulate reasonable measurement scenario, two antennas are placed a large 32×32 array and excited using TE or TM polarization. The simulation is simplified by applying two symmetry planes reducing the problem to 16×16 array, requiring approximately one quarter of the original number of unknowns.

A rather complicated realistic scenario can be simulated on a standard laptop or desktop PC in a couple of minutes per frequency point. Considering the fact that the simulation requires around 33,000 unknowns, the required time can be decreased if a single inexpensive CUDA enabled GPU card is added to configuration and utilized via the GPU solver.

The simulation verifies the measured results showing the gap in the frequency band between 10 and 13 GHz. The problem of interest is rather wideband. If the simulation band is narrowed to a 0.5 GHz and simulations performed at 100 frequency points, numerous local resonances and glitches can be observed in the results 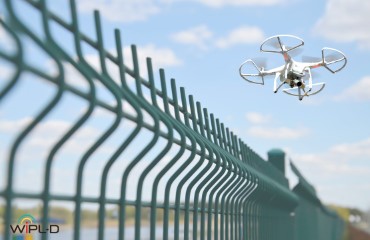 Influence of a Fence Located Between Communicating Drones

Two real-life scenarios with three drones communicating at 2.4 GHz were investigated focusing on pure electromagnetic topics related to the physical layer of communication link between the drones. Both scenarios encompass the drones above ground plane which is approximated with an infinite PEC plane and a metallic wire fence which has been introduced between two of the drones. The difference between the scenarios is in the method used to model the wire fence.

From the simulation results It can be clearly seen that presence of the fence influences S-parameters between drones’ antennas ports. In the particular case considered here, the variations of calculated S-parameters are not more than ±5 dB. It should be noted that the influence of the relative position of the fence is small. Furthermore, the way of modeling the fence has negligible effect. In the other words, the preferable fence modelling could be the one which uses Wire entities as it requires smaller number of unknowns and reduced computational resources without significant loss of accuracy.

All the simulations were carried out using WIPL-D Software, a full wave 3D electromagnetic Method-of-Moments based software which applies Surface Integral Equations. According to the simulation times, it can be concluded that all simulations were performed in an efficient manner and that WIPL-D software can be used successfully for the analysis of drone related scenarios. The 2.4 GHz IoT scenario presented in this application note encompassed the corridor with the ceiling and the floor modeled with metallic plates and infinite PEC plane respectively, a person inside a corridor modeled through a human phantom and three devices which can be part of an IoT network – the Wi-Fi routers. It was assumed that the Wi-Fi routers operated in such manner that one transmitted signal, while the rest of the routers operate as receivers.

It was shown that received antenna signals can be exploited for purpose of detection of human movement or even for determining exact human position within the corridor. It has been shown that currents on receivers change with a change in person’s location within the corridor. In a real-life scenario the currents calculated using EM simulation can be used as reference values and compared with those measured on the IoT equipment and the position of a human can be easily determined based on a database of precomputed results.

All the simulations were successfully carried out using WIPL-D Software, a full wave 3D electromagnetic Method-of-Moments based software which applies Surface Integral Equations. Despite usual approach where similar structures require application of an asymptotic solver, the realistic scenario as describe can be analyzed using a full-wave MoM based solver as simulation time per a phantom position is only about 37 minutes.