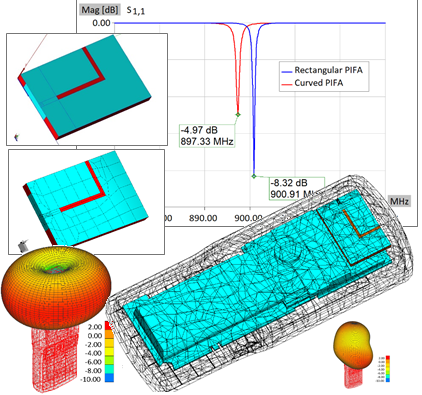 describing typical PIFAs operation, the first one where the PIFA is located in a free space and the second one where the PIFA is mounted on the cell phone boards (an antenna placement problem). The rectangular and the curved PIFAs are utilized in these simulations. The PIFAs are designed to have dual band properties, at about 0.9 GHz (‘lower band”) and 1.8 GHz (‘higher band’).

WIPL-D software (especially with its products: WIPL-D Pro and WIPL-D Pro CAD), a full wave 3D EM Method-of-Moments (MoM) based solver, is used for modelling and simulating the PIFA application scenarios. It will be shown that the simulations demonstrating these real-life (free space and antenna placement) scenarios are efficient
(executed in a relatively short time using non-expensive hardware). Calculated results are S-parameters and radiation pattern in two frequency bands corresponding to the bands used in cell phone communication. Finally, it will be concluded that WIPL-D software is suitable for complex modelling and efficient simulation of various antenna-cell phone scenarios.